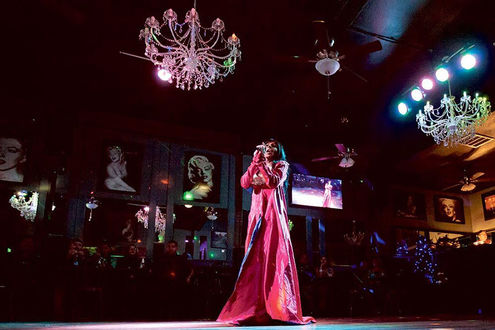 When Melanie Machetto was 7, she didn’t have a wig, so she used a bathroom towel. After putting on her sister’s dress and shoes, she was ready.

“I started singing in front of the bathroom mirror,” she says.

Forty years later, she is still dressing up and singing, although Machetto has traded the mirror and towel for Saturday nights at Franco’s Norma Jean’s Nightclub in Castroville. When it opens – for four fleeting hours every Saturday – it’s the only gay bar in Monterey County.


At 11pm on a recent Saturday, a pair of Monterey County sheriff’s deputies turned their patrol vehicles down Merritt Street in Castroville. A few bar patrons puffed away on cigarettes outside of well-worn front doors, the smoke mixing with their breath in the 42-degree air. A square sign featuring a buxom blond woman standing inside an artichoke and a neon light spelling “Franco’s” are the only markers of the club, but inside 10639 Merritt St., the scene is much more lively.

In a small storeroom in the back, a zippered suitcase of feathers and bright costumes lies on the floor under a wire shelf filled with bleach and other cleaning supplies. Across the room, Machetto slips into a pair of flesh-colored leggings and a padded bra. She applies a foundation base under her black wig.

Even though performing in drag is Machetto’s passion, she says it must be treated as a job. Much of that job is creating costumes for her characters, which number in the hundreds.

“I think about outfits all the time,” she says. “I try not to do the same costume, and there is a different one for each character. I try not to repeat a costume for at least a year, unless it’s a special request.”

By day, Machetto wears jeans and sneakers and works as the manager of a travel office in downtown Salinas. Four to five nights a week she performs in drag all over Northern California, from Gilroy and Modesto to San Jose and San Francisco. But Franco’s – where she has been performing for 20 years – is special.

“The people are more warm and familial,” she says.

The welcoming atmosphere is something Franco’s owner Ernie Sanchez prides himself on.

“It is somewhere to acknowledge who you are,” Sanchez says. “The [drag] show is a fantasy that allows people to be whoever they want to be.”

Sanchez bought Franco’s in 1987 as a combination restaurant, bar and hotel, and kept the name. He owned it for two years before, as he puts it, turning it gay.

“It never crossed my mind to turn it into a gay bar, because I didn’t think I could do it,” Sanchez says. “But I always wanted a gay bar for me, and I always get what I want.”

Sanchez says the change happened after a slow buildup of trouble: a handful of fights, then a memorable occasion when he caught someone doing drugs in the bathroom and kicked him out.

“His friends came back and said they would boycott me if I was going to ban their friend,” he says.

That made Sanchez’s decision even easier. He also added a cover charge, “which helps keep some people out,” he says.

The following week, he had a grand opening party announcing the shift. It was a quiet Sunday night, so a friend went out and returned with patrons from After Dark, then a New Monterey gay bar. “My friend told people there was now a gay bar in Castroville and by midnight all these people started showing up,” Sanchez recalls.

They included a man named Frank Garcia, who was fresh off a lip-sync contest victory. Garcia, who still works at Franco’s, asked Sanchez if they could start doing a show. A quarter century later, it continues every Saturday at midnight.

On a good night, Franco’s will get around 150 people – everyone from gay men to bachelorette parties to straight couples. For Sanchez’s birthday on June 1, which he shares with Marilyn Monroe, the club expects more than 300 people.

Sanchez added Norma Jean, Monroe’s birth name, to the bar name when he bought it in 1987. (Monroe still used that name when she became Castroville’s first honorary Artichoke Queen in 1948.)

When Machetto first visited Norma Jean’s, she didn’t know it was a gay bar.

“A friend invited me to come dance there,” Machetto says. “I had always known who I was, so for me, it was just perfect. I felt normal.”

Her group of friends started to dress in drag when going to Franco’s.

“When they asked me to dress up too, I didn’t want to expose myself to the public,” Machetto says. “It was always just for me, but the first time I did, I loved myself. This was – and is – me.”

Twenty years later it remains a fundamental part of her identity. “You just got to be you and love yourself,” she says. “I have said that from the beginning.”

FRANCO’S NORMA JEAN’S is open every Saturday from 10pm to 2am and some holidays. For more information, call Ernie Sanchez at 794-7423.