Iceberg Lettuce, and its name origin. 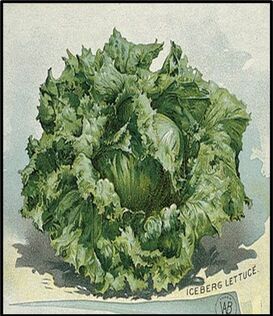 Have you ever played the telephone game in which a person whispers a phrase in the ear of the person next to them, that player then whispers that phrase to their neighbor, it repeats until it reaches the last player?

When the last player says aloud the phrase so everyone can hear, the players all learn how much it changed from the first whisper at the beginning, this is when the laughter begins. Most assuredly, the last player’s phrase includes words not included in the original phrase or has lost its original content altogether.

Legends are stories based on real people or events in history or tied to a specific place. They may describe larger-than-life exploits, or become exaggerated or change over time, but legends have a powerful base in history.

A person tells a story and then the listener repeats it. The listener then decides the degree of change to the story. Thus, the birth of a legend.

This legend begins in the 1870s when the railroad used wood-bodied reefers to transport fresh vegetables across country. These reefers would be top iced over the vegetable cartons inside. Railyard workers delivered a two-to-four-inch layer of crushed ice through openings in the top of the loaded reefer just before shipment. The railroad would replenish the ice as needed each day during the shipment to ensure freshness of the product inside.

To this day, the legend of the origin of the name of iceberg lettuce continues. These statements have proliferated the legend “the lettuce arrives packed in an iceberg of ice,” “it is the iceberg shape created by the icing process itself.” One report suggested “iceberg lettuce was named after the breeding–specifically because the lettuce could hold up to refrigeration better than others.”

The legend propagated by journalists, websites, and Salinas Valley produce companies have peddled a legend about the name “Iceberg” and where the name comes from also continues. John Steinbeck’s novel East of Eden created yet another legend for his main character, Adam Trask.

In my research process, it is easier to disprove a legend than to prove it. In this case, I have proven the origin of the name–and refuted the legend. Here is the truth behind the legend.

W. Atlee Burpee and Co., a seed company of Philadelphia opened its doors in the Spring of 1876 with a mail-order poultry and livestock company. Already a household name at age 19, its founder, Washington Atlee Burpee traveled the world in 1877 looking for “the old country” seeds for breeding and hybridization at his facility in Doylestown, Pennsylvania.

As the first research-based seed company founded in the United States, Burpee's company pioneered hundreds of new vegetable varieties.
In 1893, Burpee mailed more than fifty-thousand free trial seed packets of their newly developed lettuce and tomato varieties, describing the new lettuce as large heads with curly leaves which fold in tightly to cover the outside of the solid heads that are bright light green with a very slight reddish tinge at the edges. The small indentations on the heads store dewdrops assisting in the freshness process.

August 15, 1893 “Iceberg lettuce is excellent. I gave several heads to my neighbors to try, and all say with me that it is the best they ever ate.”
In January of 1894, Burpee’s Farm Annual introduced the heirloom iceberg lettuce seed to the world, which said it would revolutionize the salad industry. The catalog said they named the lettuce seed after its crispness and icy-crystalline appearance, which well warrants the name of “Iceberg.”  The seed packets sold for 10 cents or $3.50 per pound. The catalog labels the heirloom seed as “Iceberg A” and is listed in the “crisphead” lettuce variety category.

This new revolutionary variety bred by Burpee marketed as the first lettuce developed to survive railroad long-distance trips and stay crisp, making fresh lettuce available to American families and restaurants year-round for the first time. In tribute, farmers named their children “Atlee” over the next twenty years.

​The W. Atlee Burpee Company National Postal Museum says, "Burpee changed American horticulture by recognizing the distinct and varied character of the country’s latitudes, landscapes, climates, and growing conditions." Burpee saw that even superior European vegetable varieties, when grown in the United States, did not meet his company’s “Burpee Standard,” his guaranteed measure for quality and performance.