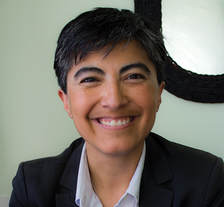 OCTOBER 31, 2017
Op-Ed: Visibility & Inclusion
For LGBTQ Youth, Silence May be as Damaging as Hate
By Lisa Cisneros

October, that stretch of time that brings us National Coming Out Day and LGBT History Month, is coming to a close. For many LGBT people the celebration of coming out and the public commemoration of our history are important markers of visibility and inclusion. We don’t take this affirmation for granted.

I can’t help but remember being sixteen years old. I remember coming out to myself, and then hiding in the local library in Salinas, searching for books with some reflection of what I felt. I had only a vague notion that I might have classmates or a teacher who could also be gay. I did not have any out LGBT people in my large, extended family. I didn’t know anyone who was openly LGBT in my community. I devoured the four LGBT themed books I found on the shelves.

The history books were my favorite. They showed LGBT people woven into the fabric of our country. I saw struggle, but I also saw resiliency and hope. I saw people who were different and proud of themselves. At the time, I was so scared. I didn’t know what was going to happen to me. I was worried I would lose beloved family and friends. I sat on the ground at the end of the library aisle where no one would find me. I faced the corner with these books cradled in my lap. I felt terrible, but the books were life ring buoys, carrying me through a dark time.

CENTERS FOR DISEASE CONTROL AND PREVENTION
This experience is not unique to me. Affirmation is something that too many LGBT people still struggle for, especially if they are young or live in families or communities that have not actively embraced LGBT people. Last year, the Centers for Disease Control and Prevention released a first-of-its-kind analysis of the health and well-being of lesbian, gay and bisexual youth across the country.

The statistics were disturbing. Nationwide, 17.7 percent of all students and 42.8 percent of gay, lesbian, or bisexual youth had seriously considered attempting suicide during the twelve months before the CDC’s survey. Poverty, immigration status and racial disparities compound the struggles many LGBT youth face.

Fortunately, many youth, teachers and advocates are starting to challenge these trends here at home. San Benito County, at the urging of local students, recently opened an LGBTQ+ Youth Resource Center in Hollister. This year, folks on the Monterey Peninsula relaunched their annual Pride celebration.

More than 10 percent of California public middle and high school students identify as LGBTQ, and more than half of them are Latino.
The Salinas Union High School District’s decision to increase mental health staff, rather than increase reliance on campus police officers, will likely have a more direct, positive impact on LGBTQ students, in addition to supporting students overall.

The reasons LGBT young people continue to struggle are complex. Yet it’s simple for us to recognize that we must do more. First, we must publicly acknowledge the significant number of local LGBT youth, from the Peninsula to Salinas to South County and to Santa Cruz County.

This month, a report from the Williams Institute, a UCLA based think tank, determined that 10.3 percent of California public middle and high school students identify as LGBTQ. According to the report, more than half of the LGBTQ youth are Latino, and there is no significant difference between the percentages of rural and urban youth who identify as LGBTQ.

Second, we must do more on a year-round basis, in addition to our Pride celebrations. California has many LGBT civil rights protections. However, local initiative is often required to ensure that these rights are respected and key laws implemented.

Finally, we must recognize that silence and invisibility have the potential to cause as much harm to LGBTQ youth as words and acts of hate. We must realize that together, we, youth, parents, family members, teachers and friends can make a difference. When we unite and value our diversity, we are going to be stronger and healthier as a community.

About Lisa Cisneros
Lisa Cisneros of Salinas is an attorney and the LGBT Program Director for California Rural Legal Assistance.