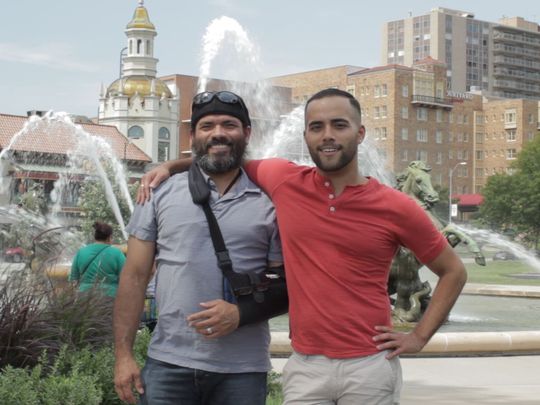 Marco Castro-Bojorquez says the voices of Latino fathers are rarely heard when it comes to addressing LGBTQ issues, so the Mexican filmmaker based out of Los Angeles and some friends wanted to do something about it.

The documentary, which explores the relationships between Latino immigrant fathers and their LGBTQ family members,will screen free of charge Friday, Feb. 5 at Maya Cinemas in Oldtown Salinas.

A panel discussion with the director and family members interviewed in the film will take place after the screening.

“The reason it’s playing in Salinas is because you guys have an amazing group of people, a collaborative that works on LGBT issues. Lisa Cisneros, the LGBT program director at California Rural Legal Assistance called me and told me they were interested in showing the film,” said 48-year-old director Castro-Bojorquez. “I was more than happy to join them and bring the film.”

It was the Monterey County LGBTQ Collaborative that contacted Castro-Bojorquez. It’s made up of about 10 organizations working to improve services for LGBT people in the county.

Originally, the film happened so they could support organizations like Somos Familia, which was founded in the East Bay by two mothers with Latino gay and bisexual sons to reach out to other families.

“At the beginning it was just for them, but now it’s for all of the organizations that work with LGBT youth that are Latinos and their families,” he said. “There are people in Venezuela, Ecuador and Mexico working with the film. It has a universal approach, but I specifically thought it was a mission I could contribute to because I’ve been working with Latino LGBT youth and their families for a long time. I know about the importance of family acceptance and how filmmaking can contribute to that.”


Castro-Bojorquez, who identifies as a queer man, has worked for many years as an activist, working specifically with LGBT youth.

In November, Castro-Bojorquez was honored as a Champion of Change at a White House event in November that recognized individuals using art to make a difference in the lives of LGBT people.

El Canto del Colibrí was done as a “tool for change,” he said.

“Through this event we will raise awareness about the role that parents and family members play in supporting and advocating for their LGBT children and relatives,” Cisneros said. “There are many challenges that LGBT people face, but family can make a critical difference in overcoming any difficulties that arise.”

Castro-Bojorquez said screening the film in places like Salinas is much more rewarding for him than possibly getting into and seeing it at international film festivals.

“I’ve been lucky that the film has played in many film festivals and has gotten very good reviews from the media. But the core of our work and what the film is meant to do is transform and inspire communities. I can go to Sundance or Cannes, but my community is not there,” he said. “…the film is meant to be shown in communities that are going to be directly impacted by the topics developed in the film. Being in Salinas means a lot. It means I can be there with all of you, talk to you, thank you, but also inspire and start conversations.”

Cisneros, whose organization is part of the collaborative, said the film screening was a great opportunity to have conversations of family acceptance of LGBT.

“We’re going to have a fantastic turnout. There’s been a lot of social media outreach and the event itself is free. There’s a lot of interest, a lot of energy in the community for this type of conversation,” Cisneros said. “…I think it’s a wonderful story, a story that highlights the capacity of the fathers to make a real difference in the child’s life through love and acceptance.”

In May, just weeks before the film was released and shown at the Frameline San Francisco International LGBTQ Film Festival, Castro-Bojorquez traveled to Mexico to visit his dying father.

The two always had a complicated relationship because of his sexual orientation. Talking about the film and Castro-Bojorquez’s activism work helped his father understand his son a little better. While his father never rejected him, the two never really talked openly about it.

At the hospital, his father began asking questions.

“I find myself at times feeling very lucky that I’m able to contribute to my community that I really care for,” Castro-Bojorquez said. “…the film is very symbolic to me. It somehow made me closer to my dad, unfortunately, it was toward the end of his life, but it was still very meaningful.”

The film screening and community dialogue of El Canto del Colibrí is at 6:30 p.m. on Friday, Feb. 5 at Maya Cinemas, 153 Main Street in Oldtown Salinas. The film is in Spanish with English subtitles.